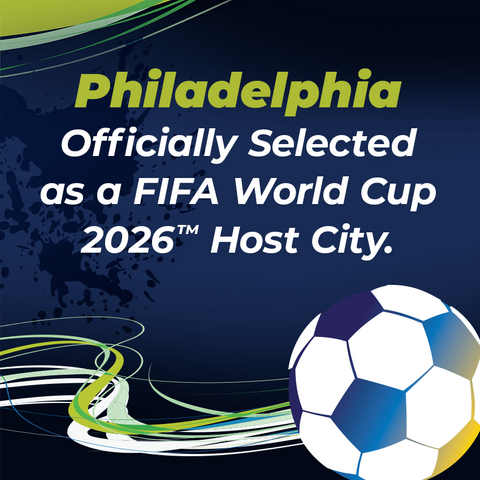 “What a victory and what a testament to the strength of our bid,” said Daniel J. Hilferty, Chair, Philadelphia Soccer 2026. “The competition to host FIFA World Cup 2026 has been fierce but with the City, PHLCVB, Philadelphia Eagles, Philadelphia Union, Eastern Pennsylvania Youth Soccer, and more, we highlighted our terrific experience with international events, an elite match play venue, a passionate soccer community, a powerful commitment to social impact, and an unrivaled hospitality experience at every opportunity. We also demonstrated tremendous support and capacity to host FIFA World Cup matches from our business community, led by Brian L. Roberts, Chairman and CEO of Comcast Corporation. From Philadelphia to Pittsburgh to Scranton to Harrisburg, our efforts have been met with enthusiasm and a true understanding of what hosting FIFA World Cup in 2026 would mean for Philadelphia, the region and the entire Commonwealth. It made all the difference. Now, 2026 presents Philadelphia – and Pennsylvania – with a once-in-a-generation opportunity to shine on the world's stage. With FIFA World Cup in Philadelphia now as the centerpiece of our 2026 plans, which also include the 250th Anniversary of our nation's founding and the Major League All-Star Game, we intend to seize the moment!”

Philadelphia Mayor Jim Kenney, echoed Hilferty's sentiments, “This is an incredible win for the Philadelphia and sets the stage for an unprecedented year for our city in 2026. FIFA saw what we all know is true: Philadelphia is a welcoming, world-class city and we have the experience to deliver a fantastic experience for teams, fans, and sponsors alike. In the last five years, tremendous work has been put forth on behalf of this bid, especially as we navigated multi-year delays due to the COVID-19 pandemic. I am immensely proud of the exceptional work that we presented to FIFA, and I am grateful to the many partners who came together to support this Bid, including the PHLCVB, which led the charge dating back to the United Bid in 2016-17 and the Philadelphia Eagles, who have made Lincoln Financial Field such a spectacular venue. I especially want to thank Ambassador David L. Cohen and Dan Hilferty who served as passionate Chairs for this Bid. Their commitment to the vitality and success of our city cannot be overstated and FIFA's selection of Philadelphia as a Host City reflects the power of their civic leadership. For that, and much more, we owe them a debt of gratitude.”

Today's announcement by FIFA immediately shifts Philadelphia Soccer 2026 into the operational Host Committee charged with planning and executing the event for the City of Philadelphia. The 501c3 nonprofit organization will continue to be chaired by Hilferty and governed by a five-person Board of Directors. Michelle Singer, Vice President for Political Affairs and Strategy for the Comcast Corporation, will serve as Senior Advisor to Philadelphia Soccer 2026.