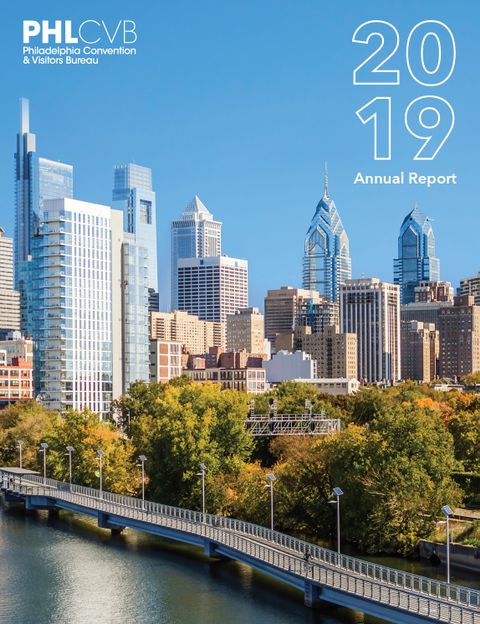 Today, the Philadelphia Convention and Visitors Bureau (PHLCVB) released key tourism results as part of its 2019 Annual Report, underscoring the importance of Philadelphia's tourism industry and its role as an economic engine for the city. With more than 76,700 hospitality-related jobs in Philadelphia, tourism is one of the city's largest employment sectors and will be a critical pillar in the COVID-19 business recovery strategy.

Nineteen citywide conventions[1], the most in a decade, contributed significantly to the 1.1 million total group hotel room nights for Philadelphia. Of these group room nights, the PHLCVB was responsible for 57% of the total, a year-over-year increase of 10%. PHLCVB-booked meetings, conventions and events generated $600 million in total economic impact – a year-over-year increase of $100 million. This resulted in $23 million in local tax dollars for Philadelphia.

“Our partners at the PHLCVB and across the hospitality industry are working every day to bring visitors to the City of Philadelphia who, in turn, help to create job opportunities for tens of thousands of hard-working Philadelphians,” said Philadelphia Mayor Jim Kenney. “This report is a conscious reminder that we need to stabilize and support the hospitality industry, as it will be a major factor in our recovery efforts on the other side of this crisis.”

The PHLCVB is the official tourism promotion agency for Philadelphia globally and the primary sales and marketing organization for the Pennsylvania Convention Center, coordinating its efforts with local partners and seven international representation offices around the world to bring visitors to the city.

“We're extremely proud to present this report because it is a reflection of the hard work of our industry and it serves as a barometer for what we are capable of achieving together,” said PHLCVB President and CEO Julie Coker. “Center City Philadelphia hotel room revenue grew by 31.6% in the past five years, helping to generate more taxes for the city and state, and serving as a strong indicator of Philadelphia's increasing appeal as a top destination. The historical implications of COVID-19 in 2020 will put these numbers into perspective, but we are resilient and determined to do whatever it takes to make a full recovery.”

2019 Meeting and Convention results include:

In 2019, the PHLCVB sales team booked 602 meetings, conventions and sporting events for future years, which are estimated to generate 692,736 hotel room nights. Some of the 2019 booking highlights include:

Additionally, in close partnership with the PHL International Airport, the PHLCVB promoted new overseas airlift, including direct service from Edinburgh, Berlin, Bologna and Dubrovnik on American Airlines, and expanded service from Dublin on Aer Lingus. Promotional efforts included in-market events for trade and media, as well as hosting international dignitaries and journalists in Philadelphia.

To learn more about the PHLCVB and the progress made in 2019, or to download a copy of the PHLCVB's Annual Report, visit www.discoverphl.com/annualreport.

[1] A group that generates at least 2,000 hotel room nights on the peak night of the event.