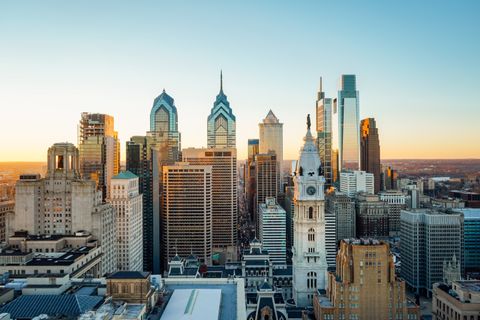 “Hospitality is one of the largest and fastest growing employment sectors in Philadelphia because we continue to see visitation rise across all sectors. Overseas visitors are incredibly important as they account for 57% of all international visitation and 79% of all international visitor spending,” said PHLCVB President and CEO Julie Coker Graham. “Every day our team is focused on telling Philadelphia's story globally. In 2018 our team hosted 96 influential global media and 334 travel trade professionals
in-market. By doing so, we're able to reinforce positive perceptions of the city and encourage and inspire future visitation.”

The PHLCVB also works in concert with local industry partners like the Greater Philadelphia Hotel Association, Visit Philadelphia and the Philadelphia International Airport. The destination's collective message is resonating: the American experience should begin in the city where the country was founded.

In 2018, nine of Philadelphia's 'top 10' overseas markets grew year-over-year (YOY). Philadelphia's top five markets include the United Kingdom, China, Germany, India, and France, respectively. Some of the notable highlights include:

The PHLCVB, the official tourism promotion agency for the City of Philadelphia globally, operates representation offices in seven locations around the world and actively stimulates interest in Philadelphia across 23 global markets. In conjunction with, and under the direction of a global tourism team based in Philadelphia, these international offices work to amplify Philadelphia's message as a premier U.S. destination.

Some of the 2018 highlights include:

Along with PHL International Airport, the PHLCVB supports the development of more accessible pathways to the city and region, opening new direct flight routes from Europe and other overseas markets. Under the leadership of Rochelle Cameron, Philadelphia International Airport has developed new international service from Icelandair, American Airlines and Aer Lingus, strengthening Philadelphia's role as a gateway city to the United States.

“In 2018, we launched three new overseas routes, including additional service from Ireland, which saw visitation increase to Philadelphia by over 40%,” said PHL International Airport CEO Rochelle Cameron. “Also in 2018, we had 4.2 million international passengers touch down on our runways, a 6% increase from 2017 and a 17.1% increase since 2004. It's a trend made possible through the hard work of our staff and partners across the entire industry.”

To learn more about the 2018 overseas visitation results, and the PHLCVB's work in overseas markets, visit our media room.

The Philadelphia Convention and Visitors Bureau (PHLCVB) creates positive economic impact across the Philadelphia region, driving job growth, and promoting the health and vibrancy of our hospitality industry by marketing the destination and the Pennsylvania Convention Center, and attracting overnight visitors. Our work engages our local community, as well as culturally and ethnically diverse regional, national and international convention, sporting event and tourism customers.