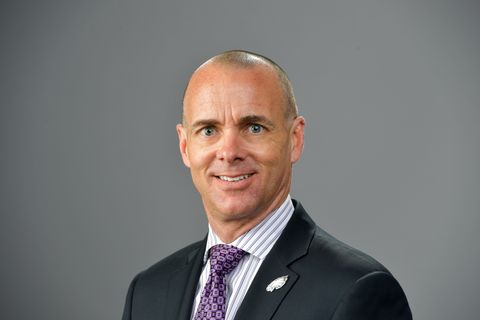 With a clear vision for how to position Philadelphia as a leading sporting event destination, and a track record for philanthropy in the region, Philadelphia Eagles President Don Smolenski has agreed to serve as the next Advisory Board chair of PHL Sports. PHL Sports is a business development division of the Philadelphia Convention and Visitors Bureau (PHLCVB), and brings together the area sports community to attract major sporting events to Philadelphia.

After the recent passing of Philadelphia Phillies Chairman David Montgomery, who served as the PHL Sports Advisory Board Chair for the past 10 years, PHLCVB leadership sought a successor with an established reputation locally and nationally. Smolenski has served on the PHL Sports Executive Committee for more than a decade and worked closely with Montgomery, the PHLCVB and PHL Sports on numerous projects through the years.

“Don's proven leadership experience, his ability to collaborate across industries, and commitment to civic engagement are some of the reasons he's the perfect fit for this job,” said PHLCVB President and CEO Julie Coker Graham. “As sports events become an ever more competitive business segment on the national level, there's no better choice for our organization and for the city.”

Smolenski has been with the Eagles for 21 years and was promoted to his current role in 2012. As president, he directs the club's business and strategic efforts including sales, marketing, communications, and operations.

“I am honored to step into this role, knowing fully that I will lean on the lessons I learned from working alongside David for almost 20 years,” said Smolenski. “I look forward to continuing to facilitate the collaboration among the PHL Sports board members as we collectively serve to secure and execute major sporting events in the City of Philadelphia.”

Smolenski has played an integral role in the development and evolution of the team's cutting-edge Go Green program, which has been nationally and internationally recognized for its commitment to sustainability and eco-friendly measures. In December 2018, Smolenski spearheaded efforts that resulted in Lincoln Financial Field achieving LEED Gold certification. Additionally, in June 2018, the Eagles became the first professional sports team to receive ISO 20121 certification, an international standard designed to help organizations integrate sustainability into management practices and processes.

Smolenski and his team have positioned Lincoln Financial Field as a venue to attract and showcase world-class entertainment events for Philadelphia including: national and international soccer matches, the NCAA Men's Lacrosse Championships, the Army-Navy Game, and countless other headlining concerts and events to Lincoln Financial Field.

In May 2018, alongside Chairman and CEO Jeffrey Lurie, Smolenski helped launch the Eagles Autism Challenge, a one-day bike ride and 5K run/walk dedicated to raising funds for innovative autism research and care in Philadelphia. In its first two years, the team's signature fundraising event has raised more than six million dollars in new money for leading Philadelphia research and medical institutions.

He also serves as the treasurer of the team's public charity, Eagles Charitable Foundation, which provides children in the Philadelphia region with greater access to vision care, in addition to supporting autism research through grant funding.

The PHL Sports Advisory Board consists of more than 90 leaders from the sports and business community, representing the city and region's professional teams, universities and athletic venues, among others. PHL Sports was formed in 1987, and is considered among the country's leading sports commissions.

About the Philadelphia Eagles

The Philadelphia Eagles are a National Football League franchise representing the NFC East Division. Established on July 8, 1933, the club was originally purchased by a group led by Bert Bell who moved the Frankford Yellow Jackets to Philadelphia and renamed them the Eagles. Now owned by Chairman and CEO Jeffrey Lurie, the Eagles are regarded as one of the league's storied franchises, having appeared in three Super Bowls, winning three NFL Championships, capturing the Lombardi Trophy at Super Bowl LII and featuring 15 Pro Football Hall of Famers. Since 2003, Lincoln Financial Field has been home to the Eagles, a state-of-the-art venue in South Philadelphia that serves as a prime destination for world-class entertainment. Spearheaded by Lurie, the Eagles Autism Challenge is the club's signature fundraising event that annually raises millions of dollars for innovative autism research and programs. For more information, visit www.PhiladelphiaEagles.com.